Jane O’Brien attended the ORBS meeting in Nottingham, United Kingdom in the week leading up to the London Olympics, 2012. ORBS meetings, (which stands for Oncoplastic and Reconstructive Breast Surgery ) are designed to offer a scientific platform for oncoplastic and reconstructive breast surgery and are held biennially. The first international scientific meeting was held in 2008, and in 2012 a meeting was held which focused entirely on the technical surgical aspects of oncoplastic breast surgery. 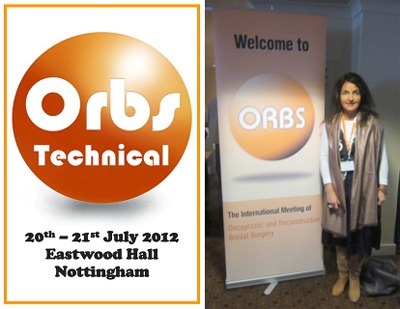 The BC3– (Breast Cancer Coordinated Care Conference) was held simultaneously in Washington, DC, USA (July 19-21). BC3 is focused on a coordinated, interdisciplinary team approach to breast cancer care and as pictured below right, sessions from the Washington meeting were viewed via live link by the delegates in Nottingham.

Both the Nottingham and Washington meetings focused heavily on the widely accepted safety and indications for nipple-sparing mastectomy, both in the risk reduction (prophylactic) and therapeutic settings. Until now, the option of a nipple-sparing mastectomy has been largely limited to women with relatively small, pert or minimally saggy breasts. Discussed in both meetings was whether it is possible to extend the anatomical criteria to include some breasts that were previously deemed too large or ptotic by reducing the breast size or degree of ptosis (droop/sag) with a staged procedure.  This option of a staged approach, involves performing a breast reduction/lift in women undergoing prophylactic mastectomy, followed by, many weeks later, the nipple sparing mastectomy.

The option, in carefully selected cases, of one stage “direct  to implant” (DTI) breast reconstruction at the time of mastectomy also featured very heavily in both conferences. This option avoids the need for the insertion of a temporary tissue expander with an obligatory second stage operation for exchange of the tissue expander for a permanent implant. The technique involves the use of an Acellular Dermal Matrix (ADM)  to act as a “hammock” at the lower portion of the breast, within which the implant lies. ADMs use donated human or pig skin that has had all the human or pig cells removed from it (acellular). This creates a sling, which mimics the natural ptosis (sag) of the breast, while supporting the implant in place. In addition to potentially better aesthetic results and a one stage compared to a two stage procedure, the acellular dermal matrix provides additional tissue coverage over the implant, perhaps reducing the risk of contamination of the implant in the case of wound problems and lessening implant visibility and palpability.