The Australasian Society for Breast Disease (ASBD) was established in 1997 to provide a multidisciplinary forum for discussion on the prevention, detection, diagnosis and management of breast disease and research into this area of medicine. The inaugural scientific meeting was held in September 1998 on the Gold Coast in Queensland and the seventh meeting was held there in Oct, 2009.

Invited international speaker, UK radiologist Dr Fiona Gilbert, spoke on the role of breast MRI as a screening tool for women at high risk of breast cancer. Currently mammography with magnetic resonance imaging is considered the optimal method of early detection of breast cancer in these women as there is now considerable evidence that the addition of MRI to mammography in high risk women will improve stage of cancer detection. Further information is required to ascertain whether this is conferring a mortality benefit for these women. According to Dr Gilbert, the trials of annual screening in the high risk cohorts that included breast ultrasound showed disappointing results for this technique, and she reported little support for using formal breast examination as a screening tool as she feels there is no solid evidence of it’s benefit in a screening setting.

Tamoxifen, a selective estrogen receptor modulator, was the first drug shown to reduce the incidence of breast cancer in healthy women. The National Surgical Adjuvant Breast and Bowel Project (NSABP) P-1 trial randomly assigned over 13,000 women, to tamoxifen or placebo. Tamoxifen reduced the incidence of breast cancer by 49% and is currently approved for breast cancer risk reduction. Tamoxifen is associated with risk of deep venous thrombosis, pulmonary emboli, endometrial cancer and increased risk for cataract formation. The second NSABP chemoprevention trial (P-2) STAR trial, compared tamoxifen and raloxifene for breast cancer risk reduction in high risk postmenopausal women. Raloxifene, another selective estrogen receptor modulator, has been used for managing osteoporosis in postmenopausal women. The P-2 trial randomized 19,000 postmenopausal women at high-risk for breast cancer and found that the two agents were similar in their ability to reduce breast cancer risk, but raloxifene had a more favorable adverse risk profile. 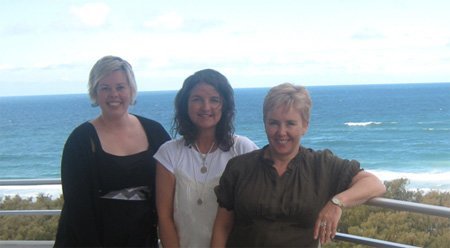 Surgical bilateral salpingo-oophorectomy (BSO) has been used as a breast cancer prevention technique as well as to decrease the risk of ovarian cancers in women with known BRCA mutations. It has been estimated that BSO performed in premenopausal women may decrease breast cancer risk 50%.

It is obviously crucial to accurately assess each individual’s risk of developing breast cancer, prior to determining, preferably in a multidisciplinary setting, the appropriate risk management strategy.

As well as being an informative meeting, the relaxing environment of Surfers Paradise provided a good opportunity for the team (Sara, myself and Mary, above) to get away together as a group.