What are breast calcifications?

Breast calcifications are tiny calcium deposits that sometimes form in the breast. They are common and found on about half of all mammograms. Calcifications usually develop naturally as the breast tissue ages. They are not caused by calcium in the diet and there is no known relationship between the amount of calcium in a woman’s diet and breast calcifications. Sometimes they form because of other changes in the breast – for example a benign breast condition such as a fibroadenoma or cyst. Calcifications can also form if you’ve had an infection in, or injury to the breast, or if you’ve had stitches or a breast implant.

There are two main types of calcifications, macro and micro. 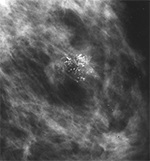 How are calcifications found?

Calcifications are usually found by chance during a routine screening mammogram or while being investigated for another reason. They show up as small white spots.

How are calcifications evaluated?

When you have a mammogram, it’s examined by a radiologist (doctor who specialise in reading x-rays and scans). Calcifications are usually evaluated with X-ray magnification views. With these magnified X-rays, the radiologist can better tell the size, shape and number of calcifications.

Using this information, the radiologist categorizes the calcifications as:

Probably benign calcifications are around 98% likely to be benign.
Suspicious calcifications may be seen in either benign or malignant (cancerous) situations.

The benign ones can be left alone, they don’t need to be removed and won’t cause you any harm. The suspicious ones need to be biopsied, and the indeterminate or “can’t tell” ones can either be followed up at an interval (usually 6-12 months) or biopsied. If the radiologist isn’t sure but thinks microcalcification is benign, they will often ask patients to come back in six months for another mammogram.

If, on the other hand, they have any worries, they will recommend a biopsy. Overall only about one of every four women with calcifications thought to be concerning enough to warrant biopsy has a breast cancer, usually at an early preinvasive stage (DCIS).

Because calcifications are so small, a computer and mammogram are usually required to locate and target them accurately, so that a needle biopsy can be taken – this is called a stereotactic biopsy.

Your doctors may sometimes recommend surgery to remove the area of the calcification from the breast. This is usually only done when a needle core biopsy has been unsuccessful at removing enough of the calcification, or when the result is not definite. In this case a technique called preoperative hookwire localisation is used to pinpoint the area for the surgeon as it can’t be felt.

There are two parts to preoperative hookwire localised breast surgery:

Before the operation –inserting the hookwire

The hookwire will be inserted by a radiologist. Before the operation, you will go to the breast department. The abnormal area in the breast will be identified with a mammogram. An injection of local anaesthetic will be given to numb part of the breast and the hookwire will be inserted under the guidance of the mammogram. A mammogram will also be performed after the wire has been inserted. This mammogram is performed with minimal pressure on the breast so that it does not make the wire move. This checks the position of the wire and helps the surgeon plan the operation. Once the wire is in position, it will be taped in place and a dressing will be applied. 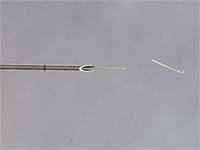 The operation – removing the calcification

Once the hookwire is in position you will be taken to the operating theatre. The operation will be performed under general anaesthetic. The surgeon will remove the piece of tissue at the tip of the wire. Once the tissue is removed, it will be returned to the imaging department where an X-ray of the tissue will be performed to confirm that the calcification is in the tissue that has been successfully removed. The specimen will then be sent to the pathologist. 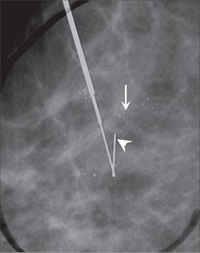