Early stage breast cancer treatment involves a combination of local and systemic therapies, which can be delivered in a variety of possible sequences.

Historically, the treatment of breast cancer involved aggressive surgical resection, an approach based on the rationale that the more complete the removal of tissue, the less likely the disease would be to recur. However, it became apparent that even after radical mastectomy breast cancer could still recur.

Over the past half century, breast cancer management has evolved from primarily surgical therapy, to a multidisciplinary approach including surgery, radiation therapy and systemic therapy. This shift is based on an increased understanding of invasive breast malignancy as a “systemic” disease, and is based on the improved outcomes with the addition of adjuvant systemic therapy to local regional therapy.

Systemic therapy refers to breast cancer treatment that targets the entire body, and when given for non-metastatic invasive breast cancer is primarily intended to reduce the risk of distant recurrence. The evolution of systemic therapy for breast cancer began in the early 1970s with the first studies assessing the use of chemotherapy after resection.

Adjuvant systemic therapy can reduce recurrence and improve survival rates by killing cells that may have escaped the primary tumour bed via lymphatics and blood vessels. This has led researchers to hypothesize that giving systemic therapy before surgery (neoadjuvant) might improve outcomes because it would destroy undetectable microscopic circulating cells.

There are two main types of breast cancer treatment: Local and Systemic.

LOCAL TREATMENTS: Treat cancer cells in the breast area only

Surgery involves removing any visible cancer in the breast and/or axilla. 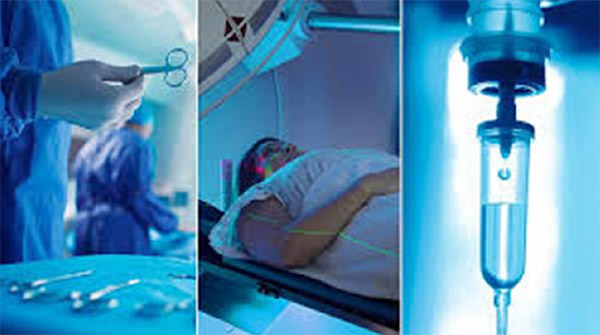 Radiotherapy kills cancer cells in the area it is aimed at, and is similar to the x-rays that are used when you have a chest X-ray.

SYSTEMIC TREATMENTS: Using drugs that can reach all parts of the body

Systemic therapies are drugs which spread throughout the body to treat any microscopic cancer cells, wherever they may be, and include chemotherapy, hormonal therapy, targeted drugs, and immunotherapy.

Chemotherapy is a cytotoxic treatment that is given to kill cancer cells throughout the body. For breast cancer, it is usually given intravenously (though a drip or injection into the vein) every 1-3 weeks, for a total of 12-24 weeks. 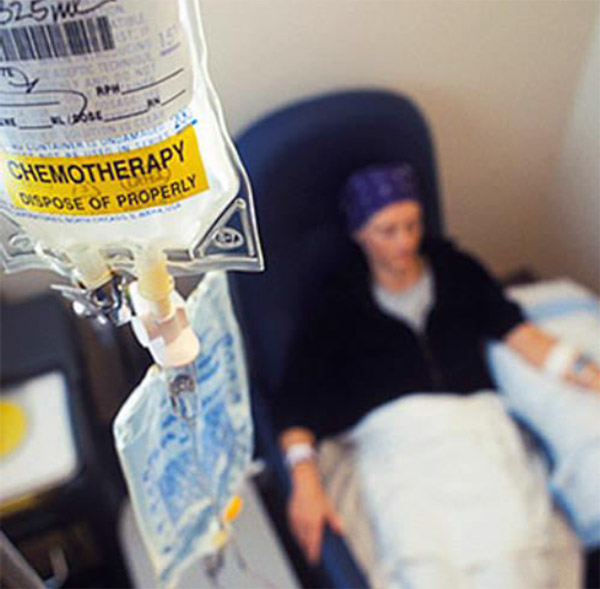 Targeted therapy, such as trastuzumab (Herceptin), is given to women with HER2 positive breast cancer. This type of treatment works by targeting the HER2 receptors on tumour cells, stopping the cells from dividing and growing. They are usually given intravenously (through an IV drip) once every three weeks for a year in total, including any trastuzumab that you might receive before surgery. Other HER2-targeted drugs such as pertuzumab (Perjeta) may also be used.

Hormonal (endocrine) therapy is a tablet that is taken every day, for women with hormone receptor positive (HR+) breast cancer (oestrogen (ER) and/or progesterone (PR) positive). For premenopausal women, a medication such as Zoladex may be also used to stop the ovaries from making oestrogen, or they may be removed surgically. Hormonal therapy works by interfering with the signal that oestrogen sends to cause this type of breast cancer to grow. Hormonal treatments are usually given for 5 years or longer.

What is Neoadjuvant Chemotherapy (NAC)?

Systemic therapy given for non-metastatic invasive breast cancer whether administered pre or post op, is intended primarily to reduce the risk of distant recurrence. The purpose of administering it prior to surgery, is also for the treatment of locoregional disease.

Neoadjuvant chemotherapy was originally employed in breast cancer patients who presented with “inoperable” disease in order to render them operable candidates. More recently however, potential benefits of NAC have been increasingly appreciated in early operable breast cancer.

Large clinical trials have shown no difference between the same systemic therapy given pre- or post-surgery on disease free and overall survival. Early randomized controlled trials comparing NAC with adjuvant chemotherapy (AC) in breast cancer patients, including the National Surgical Adjuvant Breast and Bowel Project B-18 and B-27 did not demonstrate the expected survival advantage from early treatment of micrometastatic disease. Instead, AC and NAC were shown to have equal efficacy in improving overall survival. The survival analysis from these older trials may now be less clinically relevant because of advances in chemotherapy regimens and increased knowledge regarding the molecular subtypes of breast cancer, and NAC may be more likely to benefit patients with rapidly growing and early spreading subtypes of breast cancer, but a survival advantage for patients with selected subtypes is, as yet, unproven. 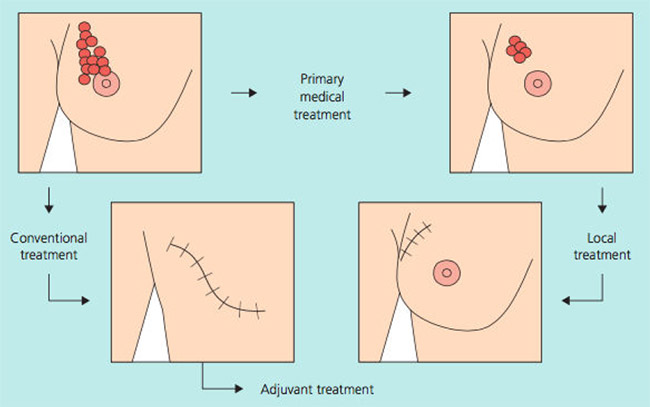 Neooadjuvant therapy may have several advantages. By downstaging of the tumour, chemotherapy can convert patients who are candidates for mastectomy to breast-conserving surgery candidates. Furthermore, it has potential to reduce excision volumes in patients with large cancers who are already candidates for breast conserving surgery, thereby improving cosmetic outcomes. Another surgical advantage is downstaging of the axilla so that lymph node dissection can be avoided in selected patients reducing surgical morbidity.

Neoadjuvant therapy also allows to monitor response to therapy at an early stage; potentially allowing time and flexibility to switch therapies if patients do not respond.

One of the benefits of initiating neoadjuvant therapy is expedited treatment of both in-breast disease and micrometastatic disease.

The traditional treatment paradigm of surgery followed by chemotherapy followed by radiotherapy is increasingly altering. Different sequencing allows treatment to be individualised, tailoring it to the tumour biology and the patient’s unique situation and preferences. 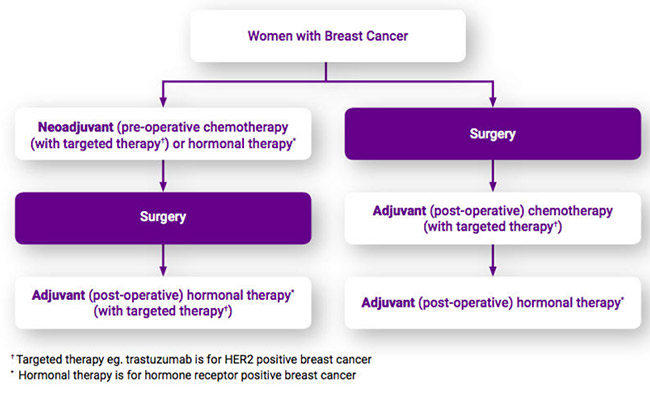 Research has classified breast cancer into five intrinsic subtypes on the basis of molecular testing and this can help guide treatment. Each type is associated with a particular phenotype and has a distinct behaviour, risk factors and sensitivity to systemic therapy that help in the selection of the appropriate regimens and medications. See Initial Treatment Decisions 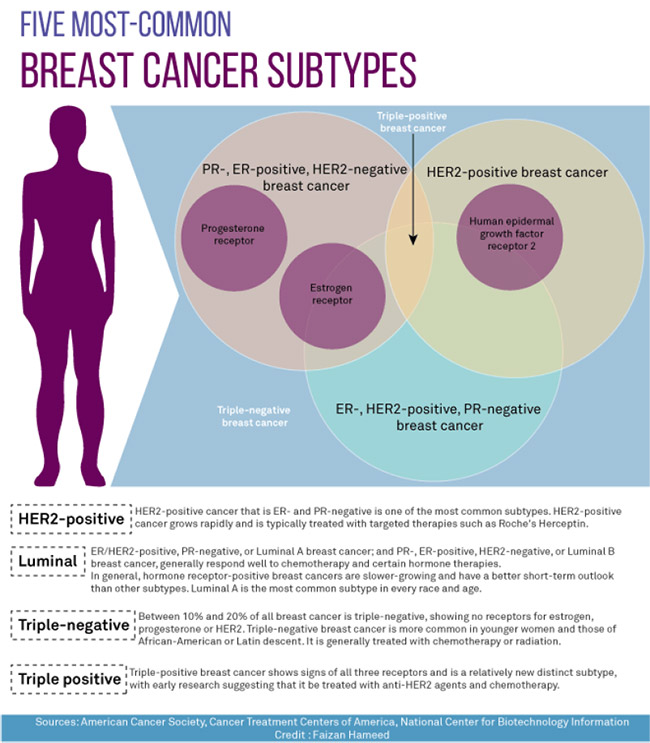 The efficacy of neoadjuvant treatment is assessed by evaluating the clinical and radiological response during therapy, and the pathological response after surgery. The likelihood of achieving a significant response is predicted by cancer phenotype; patients with HER2-positive and TNBC have the highest probability of achieving pCR after NAC. In triple negative cancers (TNBC), pCR rates up to 64% can be achieved. The highest rates have been described for ER-negative/HER2-positive tumours (up to 76%) .

Although there is consensus on the patient subgroups most likely to benefit from neoadjuvant treatment, its utilisation in clinical practice remains highly variable. All early stage breast cancer patients identified as likely to require adjuvant chemotherapy should be considered for NAC, as they may potentially benefit from treatment before surgery.

Factors favouring NAC in patients with operable breast cancer include:

Trials have shown similar survival for adjuvant versus NAC, however, a major advantage of NAC is that it has prognostic significance. In some cases, neoadjuvant therapy will shrink the cancer so much that the pathologist can’t find any residual cancer in the operative specimen. This is called a pathologic complete response (pCR), and survival is significantly improved when compared with a patient who does not achieve a pCR. If a pCR is not achieved, there is an opportunity to give additional chemotherapy after surgery.

Although a pCR is encouraging, it doesn’t mean the cancer will never return. And, many people who don’t have a pCR will still do very well. It is essential to communicate to patients that achieving pCR is not the only positive outcome measure of NAC, as downstaging from mastectomy to BCS, irrespective of pCR, is itself a positive outcome. Complete pathological response has been shown to be a powerful predictor for good long-term outcome in ER-negative but not ER-positive cancers.

The likelihood of a pCR is highest for tumours that are triple negative or are HER2+. When these features are seen on a diagnostic core biopsy, especially in a younger woman, NAC is likely to be considered. In contemporary clinical practice patients with stage II or III HER2 positive breast cancer are likely to be offered chemotherapy and trastuzumab and pertuzumab in the neoadjuvant setting.

Other advantages of NAC are that tumour shrinkage reduces the need for mastectomy and for axillary lymph node dissection, allows time for genetic testing and surgical planning in the setting of a strong family history and allows more options for breast reconstruction when mastectomy is required.

Neoadjuvant chemotherapy may be recommended: 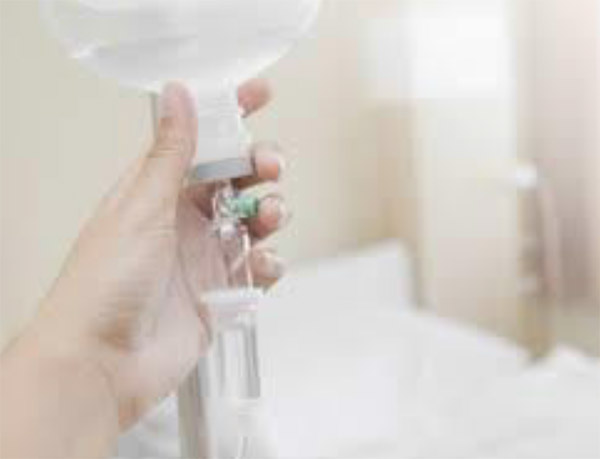