Whilst breast cancer is unfortunately a common disease, only 5-10% of all breast cancers are related to an inherited genetic abnormality and less than 1% of the population have a mutation in one of the major breast cancer predisposition genes, BRCA1 and 2. 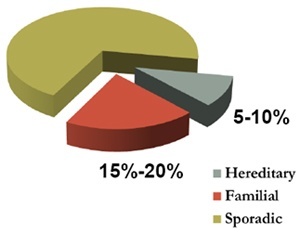 While the average lifetime risk of breast cancer to age 85 for Australian women is around 10-12%, for the very small proportion of the population who do have a mutation, the lifetime risk may be up to 80% or more, as well as a 40-50% lifetime risk of ovarian cancer. These women can face potentially life changing decisions, often while still at a young age. 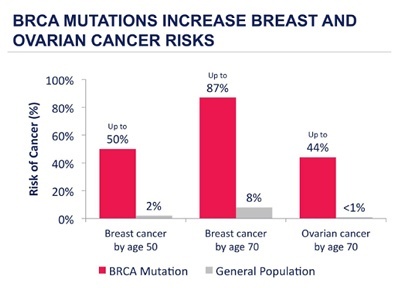 WHAT ARE THE BRCA GENES?

The BRCA 1 and 2 genes are tumour suppressor genes which were identified in the 1990s. A normal cell has two functional copies of each gene. Individuals with a BRCA mutation have inherited one nonfunctional copy of the gene in every cell of their body. These individuals therefore require only one additional hit or mutation to knock out the remaining functional copy of the gene, making cancer development much easier, and hence the development of cancer at a younger age. 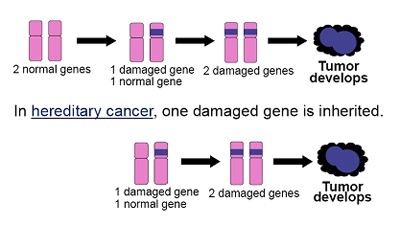 Both of the BRCA genes are inherited in an autosomal dominant pattern, which means that only one abnormal copy of the gene is needed to increase an individual’s predisposition to breast and/or ovarian cancer and there is a 50:50 risk for an affected parent of either sex to pass on the mutation to their children of either sex. The family history is therefore equally important on both sides of the family, not just the mothers, as is a common misconception. 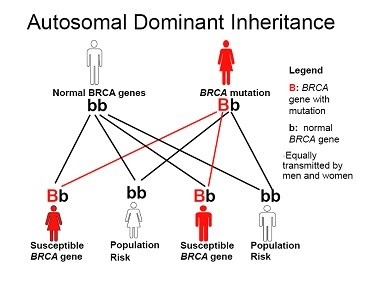 WHAT SUGGESTS A POSSIBLE BRCA MUTATION?

Mutations in the BRCA genes cause particular patterns of cancer down the generations. The estimated frequency of BRCA1 or BRCA2 gene mutation carriers in the general population is around one in 1,000 people. The frequency in specific population groups is higher, for example in people of Ashkenazi Jewish descent, the rate of BRCA gene mutation carriers is one per 50 to 100 people.

WHAT ABOUT GENETIC TESTING?

Genetic testing, which involves a blood test, is provided through Familial Cancer Centres, which are generally co-located within public hospitals. Genetic counselling is a vital part of this process. Publicly funded testing is usually offered when there is felt to be a 10% or greater chance of a mutation being present. Consumers may also elect to pay for testing through private laboratories, however it is strongly recommended that this be performed be under the auspices of a genetics service to allow appropriate interpretation and explanation of the results by trained genetic counsellors.

The testing process involves two stages. It is usually only possible to perform genetic testing within a family if there is a living relative with breast cancer. This is because looking for a gene fault is a bit like looking for a single spelling mistake in a very long book. A blood sample is first taken from a living family member who has been diagnosed with breast cancer to search for a causative gene. If a gene mutation is found, then any other adult family members can undergo testing for the same mutation. This is called predictive testing and if predictive testing in a family member fails to identify the mutation, this is a true negative result, and the risk of breast cancer in that individual is not raised. If the initial testing of the affected individual however, fails however to identify a mutation, the testing is regarded as uninformative, in that whilst no mutation has been identified, the risk is still felt to be elevated and other family members are not able to be tested in this situation.

Genetic testing can open a floodgate of mixed emotions within a family. The range of psychological issues associated with genetic testing highlights the importance of pre- and post-test counselling as a key component of the process.

WHAT IF A BRCA MUTATION IS FOUND?

For women in whom a BRCA mutation is identified, various risk management strategies are available. The precise breast cancer risk for an individual woman will vary according to several things, such as her age, the number and age at diagnosis of affected family members, and the exact nature of the fault in the gene.

The main options to manage breast cancer risk are surveillance, risk reducing medical therapy or prophylactic double mastectomy — the most effective form of prevention. There are many factors that may affect a woman’s choice, for example how old she is, or whether she’s had, or is planning to have, children.

As there is no effective form of screening for ovarian cancer, there is a recommendation for BRCA carriers to have the ovaries and tubes removed at around the age of forty, or after childbearing is completed, in order to reduce the risk of ovarian cancer, and if this is performed prior to the menopause, it in addition also reduces the risk of developing breast cancer by up to 50%.

WHAT BREAST SCREENING IS RECOMMENDED? 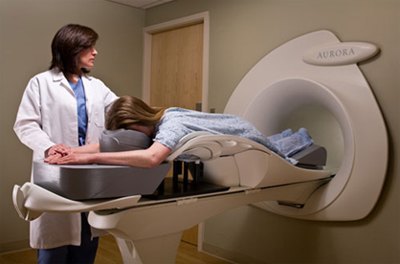 In 2009, the Australian government introduced a Medicare rebate for MRI screening for women who are at high risk of developing breast cancer. This is the only clinical circumstance in which breast MRI is subsidised at present, and eligibility criteria are fairly strict. Women must be under the age of 50, fall into a high risk category as determined by specified family history criteria, and the test must be ordered by a breast specialist.

All the above surveillance, screening strategies, it must be emphasized, are all based on early detection not prevention. Screening does not alter the risk of developing cancer. The goal of screening is to find the cancer early, when it may be most treatable. BRCA1 carriers particularly however often develop so called triple negative breast cancers, which frequently require chemotherapy, even if found when small with no spread to the glands under the arm. In addition, in contrast to non genetic breast cancer, where early detection with screening increases the chance of less radical surgery in the form of lumpectomy, in gene carriers who develop breast cancer, breast conserving surgery may not in fact be the most appropriate surgical treatment option for them, because of the risk of subsequent development of a second breast cancer in the remaining or opposite breast.  The risk of a cancer in the opposite breast may be up to 40% at 15 years in these women, and as such, these women may be medically better served by bilateral mastectomy, meaning that early detection in this situation may not in fact result in less radical treatment.

WHAT RISK REDUCING STRATEGIES ARE AVAILABLE?

There are several options that can be considered to actually lower the risk of developing breast cancer in women with BRCA mutations. As in the general population, it is advised that gene carriers adopt lifestyle practices known to reduce or modify breast cancer risk such as regular exercise, limiting alcohol intake and weight control.

Taking risk-reducing medication is also an option to lower the risk of developing breast cancer for women identified to be at increased risk. The most commonly used risk-reducing medications are tamoxifen and raloxifene, taken as a daily tablet for five years. These medications have been shown to reduce risk by up to 40-50% but despite this significant risk reduction, uptake of this option is for a number of reasons very low.

Finally there is the most radical but most effective option, the preventive or prophylactic mastectomy. This surgery involves removing as much of the “at-risk” breast tissue as possible. It is not surgically possible to remove every last breast tissue cell, whilst still retaining an adequate blood supply to the skin envelope of the breast, and risk is therefore never going to be reduced to zero. Surgery to remove the breasts does however dramatically reduce the risk of breast cancer. Based on an estimated risk reduction of 90-95% for prophylactic mastectomy, the lifetime risk of breast cancer in a carrier of a BRCA mutation after the risk reducing procedure is under 5%, which is less than half of that of a non-carrier with two breasts intact. 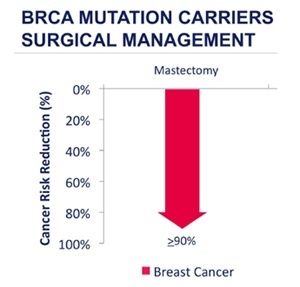 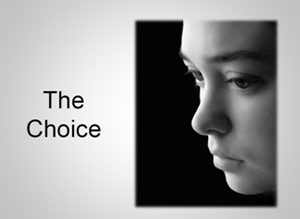 A woman’s decision about preventive mastectomy will be influenced by many things which may include her experience of cancer within her family. If you are considering preventive mastectomy, it is important to take as much time as you need and to have access to information, so that you know you’ve made the right decision for you. If you need to upgrade your health insurance, do so. This is elective, non urgent surgery. Get as healthy as possible before the surgery and if appropriate lose weight.

Consultation with a clinical psychologist who is knowledgeable and familiar with the impact of risk-reducing surgery, is often useful. The decision to undergo risk-reducing surgery can be a complex one, and even after a decision has been made, the process, including surgery and beyond, can be physically and emotionally challenging. It should be emphasized that consultation with a psychologist is not an assessment of suitability for surgery or about your competence in making decisions. It is an opportunity for you to discuss your decision, and to consider the emotional, physical, social, sexual and interpersonal implications of the surgery.

Most health professionals working in this area are sensitive to the complex issues involved when considering preventive surgery. Given however that preventive surgery is relatively uncommon in Australia, with less than 20% of proven BRCA carriers undergoing prophylactic mastectomy, some health professionals may seem uncomfortable about this choice as they may not appreciate the difficulties experienced when faced with the decision. The breast surgeon is your first point of contact in this process, and in effect acts as the gatekeeper to the rest of the surgical team, including the plastic surgeon, so do your research and preferably aim to see someone who has a special interest in this area.

Also, don’t be afraid to shop around. If the surgeon you are seeing does not offer the procedure you wish to consider, such as nipple sparing mastectomy, go elsewhere. This is an important and irreversible decision. Don’t proceed with surgery just because you have been seeing a surgeon for many years for screening, if you are not comfortable with the options being offered. Good communication between the patient and her surgeons is vital with prophylactic surgery of this sort, so that expectations are realistic and achievable.

Despite a growing body of evidence showing that, with proper patient selection and careful operative technique, nipple-sparing is a safe and effective intervention, especially for patients undergoing prophylactic mastectomy, and also it’s potential for improved cosmetic and psychological outcomes, this type of surgery is not yet widely available in Australia.
This is largely because of dual concerns regarding oncologic safety, and the surgical risk of the more ambitious and complex surgical technique. In the United States, reports from multiple centres have confirmed that both prophylactic and therapeutic nipple-sparing mastectomies can be consistently performed with low recurrence and complication rates, and NSM is slowly entering the mainstream for both the treatment and prevention of breast cancer.

Surgical complications related to nipple-sparing surgery are not unusual. The ability to oxygenate the breast skin is related to the blood supply, and the blood supply to the nipple and areola may be in jeopardy following NSM. For this reason consideration may sometimes be given to performing a “nipple delay” procedure, which involves dividing the blood vessels and other breast tissue beneath the nipple, usually a couple of weeks prior to the nipple-sparing mastectomy, so that it is no longer dependent on the underlying breast tissue for it’s blood supply. The nipple then becomes accustomed to getting its blood supply from the skin around it, instead of the breast tissue underneath it, which can potentially help it survive the surgery.