Patients who receive a new breast cancer diagnosis are understandably anxious to find out as soon as possible what treatment will entail. It is rarely possible at the time of the initial diagnosis to accurately predict exactly what treatment will be required in their particular situation, but often with the information obtained from the clinical breast examination, the initial breast imaging and the needle core biopsy pathology, it is usually possible for some preliminary predictions to be made.

As the breast surgeon is usually the first specialist with whom the patient meets, part of my role is to explain the overall treatment process, not just the surgical component, and the rationale for considering other forms of treatment, such as drug therapy and radiotherapy, in addition to surgery. 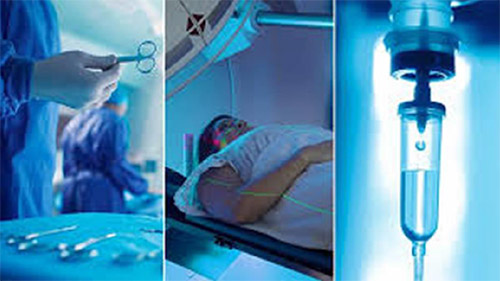 The management of breast cancer is a step by step process, with the outcome of each stage often determining what is required next, and as such, I find a helpful way of outlining the possible treatment pathways is with the use of treatment algorithms, which outline the decision making process in a flow chart format.

Practices change over time, with the introduction of modern surgical techniques and new drug therapies, and I have developed my own breast cancer treatment algorithms, based on the way I currently work through the decision making in each individual patient. See Breast Cancer Treatment Algorithms

The management of early breast cancer is based on “tumour burden” and “molecular subtype”. The two major pillars of breast cancer treatment are “locoregional” and “systemic” treatment. Locoregional therapy refers to the local treatment of the breast and axilla, with surgery +/- local radiotherapy.

The term “systemic “therapy refers to all types of drug therapy, including chemotherapy, biologic targeted therapy, and endocrine therapy. “Adjuvant” (post-operative) systemic therapy is administered in addition to local therapy to treat any potential “micrometastatic” disease, and thus hopefully prevent distant recurrence, and is tailored to the cancer subtype and risk of recurrence. “Neoadjuvant” (preoperative) systemic therapy targets local disease (breast/axilla) as well as potential micrometastatic disease elsewhere in the body.

Once a diagnosis of breast cancer is established, the extent of local disease is assessed to determine whether the tumour is “operable” or “inoperable”.

The clinical criteria of “inoperability” include inflammatory carcinoma, fixation of the tumour to the bony chest wall (ribs, sternum), extensive skin involvement with ulceration or satellite skin nodules, fixed/ matted axillary lymphadenopathy, involvement of neurovascular structures of the axilla, or lymphoedema (swelling) of the arm. All of these findings are identifiable on physical examination, and if present should prompt imaging evaluation for distant metastases. “Inoperable” breast cancer in the absence of distant metastatic disease, is a type of “locally advanced breast cancer (LABC), and is uncommon.” In these cases, systemic (drug) therapy is administered as the initial treatment in order to reduce tumour volume, the aim being to render the tumour “operable”.

NAC was initially utilized as a way of rendering locally advanced, inoperable breast cancer resectable. More recently however NAC has been increasingly used in operable tumours to downstage disease in the breast and axilla, with the intention of facilitating breast conservation and, in some instances, avoiding axillary lymph node dissection (ALND). The oncologic safety and equivalent survival outcomes of NAC have been demonstrated in several randomized trials, and a meta-analysis of patients treated with NAC versus surgery followed by chemotherapy has similarly shown no difference in survival.

The vast majority of women have “operable” breast cancer at the time of diagnosis, and in this situation the sequencing of surgical resection and systemic therapy is variable. Depending on the tumour subtype and the local extent of disease in the breast and/or axilla, preoperative systemic therapy may be used to reduce tumour volume. Preoperative drug therapy importantly also enables the assessment of the tumour’s responsiveness to drug treatment, as evidenced by operative pathology, which evaluates the level of response, according to whether there is residual tumour present, and if so, the volume of residual disease. 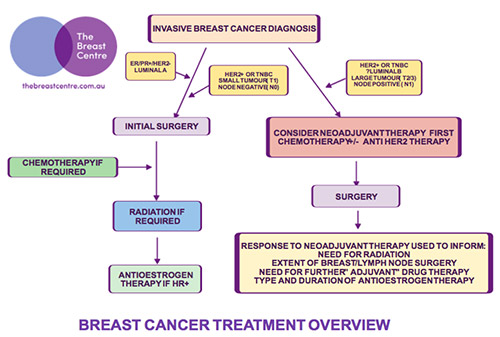 When I see a patient with a new operable invasive breast cancer diagnosis, there are three important pieces of information in which I am initially most interested, because they are crucial in informing the nature and sequencing of the initial breast cancer treatment.

These three factors are:

How Surgery is used to treat Breast Cancer