Most breast complaints are benign in nature. Despite this, most women with breast complaints “assume the worst” when a new problem is discovered. This is understandable, but to help allay these fears, an understanding of the benign breast disorders is needed. There are many types of benign breast problems, but in general terms these can be classified according to the predominant symptom – lumps, pain, nipple problems and infections of the breast.

The majority of breast lumps are benign, but finding a breast lump understandably creates considerable patient anxiety. The likely cause of a breast lump varies according to the age of the patient. The commonest causes of a benign breast lump are fibroadenomas, cysts and areas of localised nodularity. 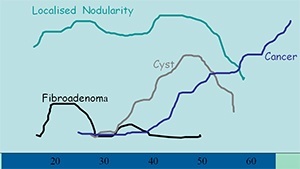 Triple Testing – a combination of clinical examination, imaging, and nonsurgical biopsy is essential for all women who have a significant clinical finding such as an asymmetrical thickening or a discrete palpable mass.

Localised nodularity is a common finding in patients who present complaining of a ‘lump’. It is a reflection of normal lumpy or nodular breast tissue that is a common clinical finding, especially in young women. It is generally found in the upper outer quadrants of the breasts. Nodularity is usually a physiological change. Most women who were previously labelled in the past as having “fibrocystic disease” simply have nodular breast tissue undergoing normal physiological cyclical changes.

Nodularity in young women (<30 years) that is symmetrical and cyclical, may be managed with clinical surveillance with repeat examination in 2–3 months. Investigation may be performed if the lump has changed on review, or if at initial presentation the woman feels it is a definite new change in her breasts. 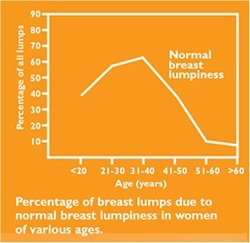 Nodularity or thickening that is asymmetric, or is a new finding in older women (>30 years), requires investigation with mammography and ultrasound. Fine needle biopsy or core biopsy should also be considered, even in the presence of normal imaging, if there is any clinical concern as a small but important proportion of breast cancers may present as localised nodularity. Close clinical follow up is an important part of the management of nodularity, so that an enlarging mass of nodularity is detected.

Fibroadenomas are harmless lumps of glandular and fibrous tissue. Breasts are made up of lobules (milk-producing glands) and ducts (tubes that carry milk to the nipple), which are surrounded by glandular, fibrous and fatty tissue. Fibroadenomas develop from a lobule. The glandular tissue and ducts grow over the lobule, forming a solid lump. They usually feel firm and rubbery and have a smooth texture. This condition is sometimes referred to as ‘a breast mouse’ because the lumps can move around when pressed.

Up to one in six (15%) of women have a fibroadenoma at some time in their life. Fibroadenomas account for about 12% of all symptomatic breast masses. Fibroadenomas are most common in women aged 20 to 40 with a peak incidence in the 21–25 year age group. Fewer than 5% occur in women over the age of 50 years. The cause of fibroadenomas is unknown, however, hormonal factors are thought to be important as fibroadenomas are known to fluctuate during the menstrual cycle and during pregnancy. Fibroadenomas can be solitary or multiple, palpable or impalpable. 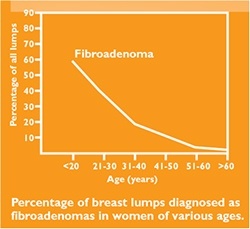 Fibroadenomas may occur as a lump which can be detected by a doctor or patient, or they may be found on a mammogram or a breast ultrasound that is done for another reason. In 80% of cases there is a single fibroadenoma. Occasionally, there can be many scattered throughout
the breasts. Fibroadenomas can vary in size from a few millimetres to five or more centimetres in diameter.

Fibroadenomas vary in their imaging appearance and are often not seen on mammography as they may have the same density as the surrounding breast parenchyma. When they are seen on mammography, they appear as a well defined density that may be lobulated and contain calcification (typically coarse or ‘popcorn-like’). On ultrasound, a fibroadenoma may appear as a well circumscribed, homogeneous, hypoechoic lesion, classically with edge shadowing; gentle lobulations may be present. In some cases, coarse calcification can be seen within the lesion on ultrasound.

Any suspected fibroadenoma that is palpable or impalpable but shows atypical features on clinical or imaging assessment requires pathological diagnosis with fine needle aspiration biopsy, core biopsy, or surgical excision.

Women commonly have a choice about whether to have their fibroadenoma removed and most often, younger women or those with smaller fibroadenomas will not have them taken out, but if the lump continues to enlarge, it should be removed. Patients may also request removal. Patient anxiety is an important factor in determining surgery. Despite reassurance from negative triple assessment, some women are unhappy with the prospect of a lump being left in their breast, and in order to relieve this understandable anxiety, excision can be performed. The operation to remove a fibroadenoma is relatively simple and is performed under general anaesthetic. 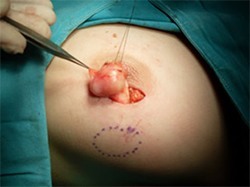 In most cases you won’t need any follow up or treatment if you have a fibroadenoma. Usually you’ll only be asked to go back to your GP or the breast surgeon if it gets bigger or you notice a change.

Cysts occur when fluid becomes trapped in the breast tissue. They are most common in women between the ages of 35 and 50. Cysts usually disappear with menopause, but are common in women taking hormone replacement therapy. Approximately 7% of women will present with a palpable cyst at some time in their lives. Studies have reported cysts in up to 50% of women who attend breast clinics. Most breast cysts are impalpable and asymptomatic and are an incidental finding on routine imaging. Cysts that are apparent clinically, classically present as lumps that are smooth, soft to firm, mobile, and sometimes tender and often of sudden onset. Cysts under tension can be firm to hard on examination and may be associated with significant tenderness.

The fluid in cysts can be drained using a fine needle. Cysts sometimes return after they have been drained. They are harmless, but to make absolutely sure that it is not cancer, your doctor should check any new lump that can be felt. 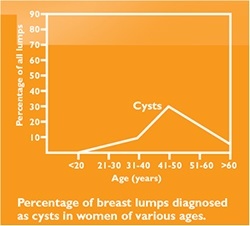 Cysts seen on mammography classically appear as well defined round densities that may be multiple. On ultrasound, typical cysts are well defined round or oval anechoic (black) lesions (pictured below) Cysts that show ‘atypical’ features (features other than those of a simple or typical cyst) such as internal echoes or thick walls, may on occasions be difficult to distinguish from solid lesions on ultrasound. 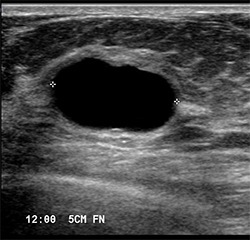 Cysts that are asymptomatic and show typical benign cystic features on imaging require no treatment. The patient can be reassured that the lesions are not malignant, and that they do not significantly increase the chance of developing breast cancer. They require no specific follow up unless they become symptomatic.

Women with cysts that are symptomatic (causing a lump or significant discomfort) can be offered aspiration for symptomatic relief, either under clinical or ultrasound guidance. Fluid from cysts that are aspirated to relieve symptoms does not routinely need to be sent for cytological assessment. A palpable lump that has the features typical of a simple cyst on ultrasound does not require aspiration for confirmation of the diagnosis.

Cyst fluid can vary in colour and consistency. The fluid in a cyst might be clear or coloured (for example yellow, green, orange or black). The most common appearance is a watery, ‘straw-coloured’ fluid, as shown above. This fluid is normal and it is not necessary to send it for testing.

Cystic lesions that show ‘atypical’ or ‘complex’ features on imaging (eg thick walls, or an irregular margin), even if asymptomatic, may require aspiration. Aspiration is considered when a possible cystic lesion cannot be distinguished from a solid lesion on imaging. In this situation, aspiration is usually performed under ultrasound guidance and in this circumstance a sample of the aspirated material should be sent for cytological assessment.
Surgery is rarely indicated for breast cysts. It is generally reserved for palpable cysts that recur despite repeated aspiration and lesions that do not resolve completely with aspiration and show atypical or suspicious cytology.

Breast cysts are not cancerous, and having cysts does not significantly increase the risk of developing breast cancer. There is a rare condition called an “intracystic” cancer, but these cysts usually look unusual on the ultrasound, and they behave differently when they are aspirated.

People who get a lot of cysts may become complacent about breast lumps and not get lumps checked. This may potentially result in a delayed diagnosis if breast cancer develops and it is therefore important that every new breast lump be appropriately investigated.

This condition occurs when there is trauma (sudden injury) to the breast, although most women don’t recall a specific injury. Breasts are made up of lobules, ducts, glandular, fibrous and fatty tissue. Sometimes a lump can form if an area of the fatty breast tissue is damaged in some way. This is called fat necrosis (necrosis is a medical term used to describe dead tissue). The damage to the fatty breast tissue may have been caused by an injury to the breast, but it most commonly occurs following breast surgery, including breast reduction and breast reconstruction, or radiotherapy to the breast. In many women in fact there is no history of any specific injury at all.

Fat necrosis feels like a firm lump and is usually painless, but in some people it may feel tender or even painful. The skin around the lump may look red, bruised or occasionally dimpled. Sometimes fat necrosis can cause the nipple to be pulled in (retracted).

The problem with fat necrosis in the breast is that it often looks like breast cancer, even though it is benign. Masses made of breast fat necrosis may look like malignant breast tumours on mammograms and other imaging studies. The mass may look dense, have an irregular shape, a spiky border, and a collection of microcalcifications. Full triple assessment is required.

Fat necrosis often goes away by itself. If the lump doesn’t disappear over time, or gets bigger, a small operation to remove it may be recommended. Fat necrosis can affect women of any age. It is a benign breast condition and does not increase the risk of developing breast cancer.