Neoadjuvant treatment offers a number of benefits for patients with early breast cancer, and is an important option for consideration by multidisciplinary teams. As the breast surgeon is almost always the first specialist with whom the patient with a new breast cancer diagnosis has contact, it is incumbent on the breast surgeon to consider the option of neoadjuvant therapy.

In my opinion, all patients should be discussed in a multidisciplinary meeting (MDM) at the time of diagnosis prior to any treatment plan being instigated so that they may be offered the full range of treatment sequencing options. 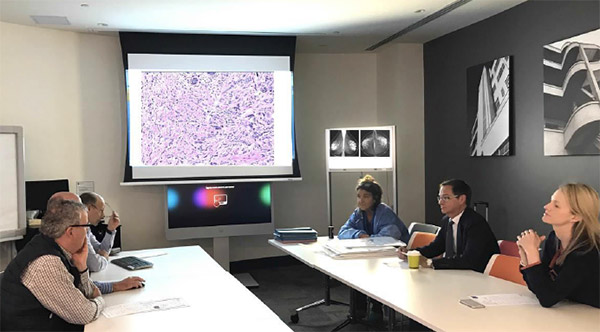 When discussing neoadjuvant treatment, it is crucial that provisional histological grade (i.e. derived from the core biopsy specimen), hormone receptor and HER2 result, including SISH if appropriate, and radiological results are available at the MDM, and discussion should include the proposed surgical plan after treatment, which will be determined by the tumour response to NAC and also the radiotherapy plan. 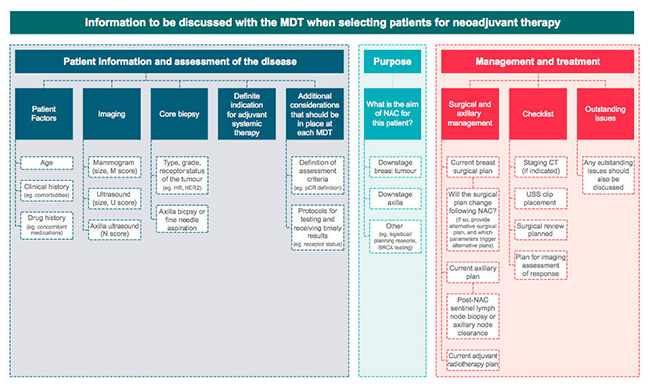 Despite literature showing its efficacy, the use of neoadjuvant therapy varies widely. NAC is used in only 3.8% of cases in the United States and in 4.43% of operable breast cancer cases in Australia (1) and New Zealand compared with 14% in Jane O’Brien’s practice in 2019.

A retrospective analysis of prospectively collected data from the BreastSurgANZ Quality Audit (BQA) database identified patients registered with early breast cancer who received NAC from 2011 to 2016. A total of 55,757 cases of breast cancer were identified from 2011 to 2016, of which 2,469 (4.43%) cases underwent NAC. The proportion of patients receiving NAC increased from 3.08% in 2011 to 6.65% in 2016.

The results show that the proportion of patients receiving NAC in early and locally advanced breast cancer is slowly but gradually increasing. In 2015, Read et al. reported that less than 3% of women with operable cancer in Australia received NAC. (2) In the light of the evidence demonstrating the benefits of NAC, it is encouraging to see that this trend is increasing in Australia although it still falls short of the estimated 20% of patients with breast cancer that might benefit from NAC .

Evaluation of the American National Cancer Database from 2010–2015, demonstrated that approximately 20% of patients who received chemotherapy, received it upfront in the neoadjuvant setting, (cf Jane O’Brien -30% in 2018) with the proportion significantly increasing in the USA from 15.7 to 26.0% between 2010-2015.

I find a helpful way of outlining the possible treatment pathways is with the use of a treatment algorithm, which outlines the decision making process in flow chart format.

Practices change over time, and I have developed my own Neoadjuvant Therapy Algorithm, based on my current practice and the way I currently work through the decision making in each individual patient. 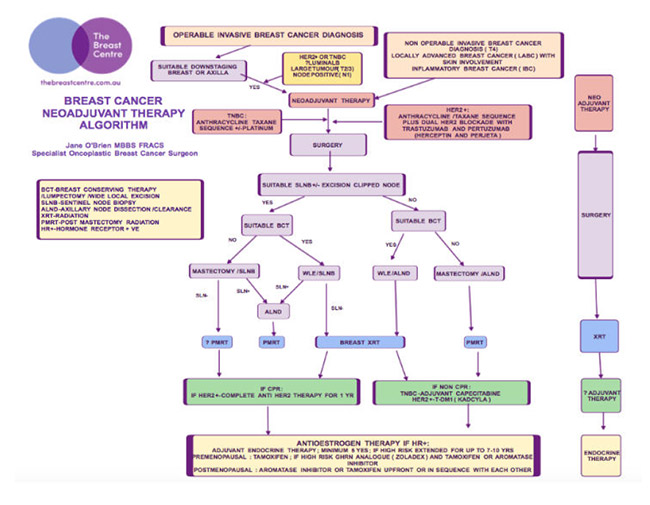 Neoadjuvant therapy has long been recommended as the optimal initial treatment for “inoperable” locally advanced breast cancer (LABC), such as inflammatory breast cancer (IBC) in order to render the disease operable.

In addition, all early stage breast cancer patients identified as highly likely to require adjuvant chemotherapy should be considered for neoadjuvant therapy, as they may potentially benefit from treatment before surgery.

For early HER2+ or TNBC which are small (T1-<2cm) and apparently node negative (N0) at the time of diagnosis, although it is highly likely that chemotherapy will be recommended at some point, there may not be enough information available with which to select the most appropriate chemotherapy regimen prior to surgery. As such, initial surgery is usually undertaken, followed then by the appropriate adjuvant systemic therapy, based on the operative pathology. 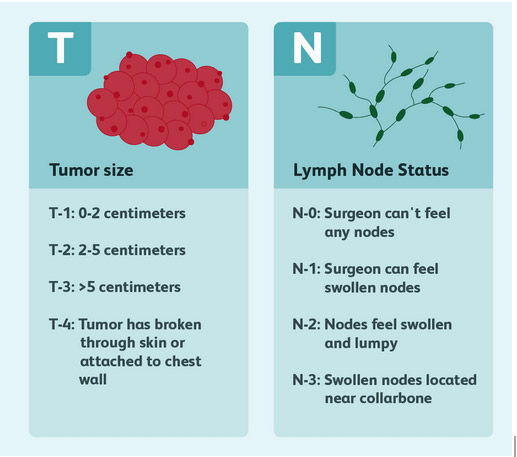 For HER2+ or TNBC which are either larger (T2 or T3->2cm) or pathologically confirmed to be node positive on preoperative needle biopsy (N1), the medical oncologist has enough information available on which to base their decision making regarding the appropriate systemic therapy regimen, and as such preoperative or neoadjuvant therapy is an appropriate option to consider.

The potential benefits of preoperative treatment in this situation are:

There are some potential disadvantages of neoadjuvant therapy:

In my practice consideration of NAC starts at the time of first consultation.

Disease progression occurs in only 3%

Nature of Surgery Based on:

Fosh et al, Neoadjuvant chemotherapy rates for breast cancer in Australia — “are we there yet?”. Ann Breast Surg 2019

Brittany L. Murphy and Judy C. Boughey, Changes in Use of Neoadjuvant Chemotherapy Over Time—Highest Rates of Use Now in Triple- Negative and HER2+ Disease, Ann Surg Oncol, 2018.

Littlejohn, Is Australia lagging behind in the use of neoadjuvant chemotherapy for breast cancer? Ann Breast Surg 2019

The American Society of Breast Surgeons: Performance and Practice Guidelines for the Use of Neoadjuvant Systemic Therapy in the Management of Breast Cancer