Risk measures the chance of something happening. There are a number of ways in which risk is represented. Risk is commonly communicated, by healthcare professionals and the mass media, in two ways – relative risk and absolute risk.

Suppose you have had breast cancer and had lumpectomy with clear margins (meaning no cancer was found between the tumor and the edge of the surrounding tissue that was removed along with it).

Now, after lumpectomy and radiation, is there something else you can do to knock down the 10% risk further? You may also choose to take hormonal therapy (for example, tamoxifen or an aromatase inhibitor) for 5 years. If you do that, you can reduce your risk by another 50%. By taking hormonal therapy for 5 years, you lower your relative risk of the cancer coming back in the same breast by half, or 50%. To see how big a difference hormonal therapy makes in your absolute risk , take half off your risk:

Now your absolute risk of the cancer coming back is 5%. So by having radiation therapy and taking hormonal therapy for 5 years, you have reduced your risk of the breast cancer recurring from 30% to 5%.
As another example of risk, women in their 50s taking hormone replacement therapy (HRT) for five or more years for the management of menopause symptoms could be said to be at 35% increased risk of breast cancer over women who do not use HRT. In other words, the risk has increased from 11 in 1000 women to 15 in 1000 women. This is an increase of 35%, but in real terms it is only 4 extra women in 1000 – or 0.4% absolute risk.

Knowing how much your breast cancer risk changes with lifestyle changes and treatment options can help you and your doctor make the best decisions for You. 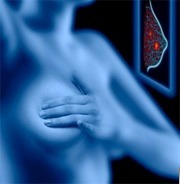 One in nine women in Australia will develop breast cancer in their lifetime.

Being a woman is the main risk factor for breast cancer. Women are 100 times more likely to develop breast cancer than men.

Being 175cm or taller is associated with a slightly increased risk for breast cancer.

The relationship between weight and breast cancer risk depends on whether you are pre or post-menopausal. 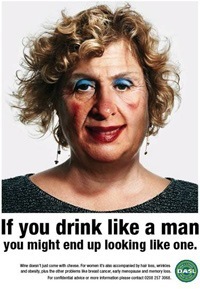 Drinking more than two glasses of alcohol each day is associated with an increased risk of breast cancer. This includes beer, wine and spirits. Your risk increases with each additional 10g of alcohol intake per day.

Breast cancer occurs more frequently in women who have had Hodgkin’s disease as a consequence of treatment with radiation and/or chemotherapy.

High dose ionising radiation, as is experienced with some cancer treatments and in certain environments, is associated with increased breast cancer risk. The highest risks are associated with an earlier age of exposure.

Active women of all ages are at reduced risk of breast cancer compared to women who do not exercise.

The exact amount of physical activity needed to reduce your risk is not yet clear. However, studies have shown that one and a half to four hours per week of brisk walking (or equivalent) reduces the risk of breast cancer in post-menopausal women. And the more exercise you do, the bigger the benefits in lowering your risk.

Among women who have had children, having them at a younger age (less than 30 years) is associated with lower breast cancer risk.

Breastfeeding for a total of 12 months or longer can slightly reduce your breast cancer risk.

The significance of a family history of breast cancer increases with

The risk is stronger if two or more relatives have other characteristics associated with increased risk, such as being diagnosed before age 50 or being of Ashkenazi Jewish descent.

Breast or ovarian cancer caused by inheriting a faulty gene is called hereditary cancer. We all inherit a set of genes from each of our parents. Sometimes there is a fault in one copy of a gene which stops that gene working properly. This fault is called a mutation.

Ashkenazi is the term used to refer to Jews who have ancestors from Eastern or Central Europe, such as Germany, Poland, Hungary, Lithuania, Ukraine or Russia. As Ashkenazi Jews descend from a small population group, they have more genes in common than the general population.

There are a number of “myths” about the risk factors and causes of breast cancer that sound plausible but have little or no scientific theory or data to support them.
There is no body of evidence that an increased risk for breast cancer can be attributed to

Breast Cancer Myths – how are they generated?

The origin of most myths is not known, but the Internet and email has helped spread many of them. It is natural for people to look for an explanation that is easily understood about why they or a loved one has breast cancer. Many myths are attractive because they seem to offer a course of action that could help reduce the risk of breast cancer.

How to Distinguish Fact from Fiction

It is not always easy to distinguish fact from fiction and myth from reality, especially if you are not an expert in science and medicine. It is important that people are not unduly worried or misled by information about breast cancer.

The use of Antiperspirants

This explanation for the higher rates of breast cancer in developed countries was generated by Sydney Ross Singer and Soma Grismaijer, a husband and wife anthropology team, in their book “Dressed to Kill”, published in 1995. They claim that tight-fitting bras constrict the lymph system, causing toxins to accumulate in the breasts and cause cancer.

This is not based on a credible hypothesis, for many of the reasons outlined in The use of antiperspirants and because lack of blood supply or increased pressure is not what causes normal cells to become cancerous. Although these researchers included some data from studies in their book to link bra wearing with breast cancer, these data have not been subject to peer review and have been criticised for lack of appropriate scientific controls.

There is a possible link between large breast size and an increased risk for breast cancer in post-menopausal women, but this is accounted for in part by the fact that obesity is a risk factor for breast cancer.

A Blow or Injury to the Breast

A blow or injury to the breast does not cause breast cancer, but it can draw attention to a pre-existing lump. An injury can damage tissue and blood supplies, but does not damage the genetic material in the cells. It is errors in the replication of this genetic material that is the basis for the development of a cancer cell from a normal cell.

There have been a number of claims that the consumption of cows’ milk can increase the risk for breast cancer. There are several issues to consider.

The guidelines for breast health and screening are also applicable to women with breast implants.

The known benefits of mammograms in the early detection of cancer far outweigh the very small potential risks of them causing cancer. The potential risk exists because exposure to ionising radiation can cause cancer. However given the limited number of mammograms a woman has in her lifetime, and the standards of the mammographic equipment in use today, the increased radiation exposure from a mammogram is no more than that from taking a plane flight across Australia.

Substantial exposure to X-rays, especially in childhood, is associated with an increased risk of cancer in later life. In the past, women who received treatment for scoliosis (curvature of the spine) in childhood and adolescence, have been shown to have an increased risk of dying of breast cancer. Today, more care is taken with these treatments and this is less likely to be the case.

Risk factors for breast – cancer a review of the evidence 2018