Most breast complaints are benign in nature. Despite this, most women with breast complaints “assume the worst” when a new problem is discovered. This is understandable, but to help allay these fears, an understanding of the benign breast disorders is needed.

There are many types of benign breast problems, but in general terms these can be classified according to the predominant symptom – pain, lumps, nipple problems and infections of the breast.

Mastalgia means breast pain. Breast pain is extremely common, and for many women who attend  this is their main and only symptom. Mastalgia affects up to 77% of women at some time in their lives, and is so common it is considered part of a normal bodily process rather than a disease. Mastalgia may be accompanied by breast tenderness, lumpiness, fullness, heaviness, or a noticeable increase in breast size. Mastalgia is not usually a sign of breast cancer or other significant breast disease. The two most common concerns of patients presenting with mastalgia are: the fear that breast pain is a symptom of breast cancer; and the presence of severe pain that affects a woman’s quality of life. 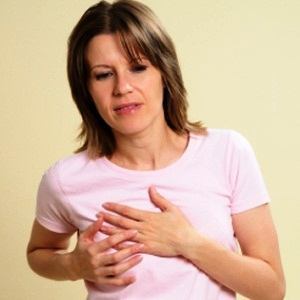 Doctors often think it a trivial symptom, but for many women mastalgia causes significant discomfort and anxiety. Breast pain can be very distressing, and many women are anxious that they may have breast cancer. In life we are taught that when we are experiencing a pain that there is something wrong with that general area. It is human nature therefore for one to jump to conclusions when it comes to breast pain. In most cases however breast pain will be the result of normal changes that occur in the breasts.

It should not be forgotten that mastalgia is a symptom, and therefore is not a specific disease in its own right. Mastalgia is classified as cyclical, ie varying during the menstrual cycle, or noncyclical. About 2 in 3 cases are cyclical breast pain, and about 1 in 3 are non-cyclical.

If you are not sure which type of breast pain you have, it may be worth keeping a pain diary (below) for 2-3 months. Record the days when you have breast pain and highlight the days when the pain is severe enough to affect your lifestyle. See what pattern emerges and after a couple of months it will become apparent if the symptoms are cyclical in nature.

Cyclical mastalgia is the most common type. Virtually all women will experience a degree of pain or discomfort in their breasts at some time of their lives – this is normal and most often occurs in the week prior to menstruation. You may experience a burning, prickling, stabbing or drawing-in pain. It can affect either one or both breasts and can spread to the armpit, down the arm, including the elbow and to the shoulder blade.
It can cause discomfort, fullness, and heaviness in the breasts, increasing progressively from the middle of the menstrual cycle and peaking 3–7 days before each period. The pain is usually relieved when the period begins. 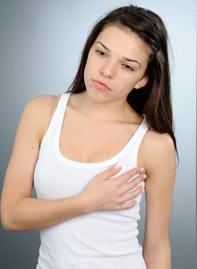 In some women however, the pain can become quite severe. When this occurs, cyclical mastalgia can be considered abnormal, and such patients usually seek advice and help from their doctor.

Due to the relationship with the menstrual cycle, it is thought that the cause of cyclical mastalgia is hormonal. Circulating hormone levels in plasma have however shown no difference between patients with mastalgia and controls and it is thought that women with cyclical breast pain simply have breast tissue which is more sensitive than usual to the normal hormone changes that occur each month.

It has also been suggested that an abnormality in the secretion of prolactin may be to blame, and certainly drugs that inhibit prolactin secretion have in the past been used in the treatment of breast pain. There are also other suggestions that consumption of too much caffeine or a deficient intake of essential fatty acids can also result in cyclical mastalgia. For this reason women are often advised to decrease their caffeine intake and are given evening primrose oil, both of which may help.

The usual age of patients with cyclical mastalgia is around 30 – 40 years. In the mildest form, the pain lasts only a few days prior to menstruation. The number of symptomatic days varies however, and in a few women, they can experience pain for virtually the whole month, with relief occurring only at the time of menstruation.

Cyclical mastalgia normally affects both breasts, but can be unilateral. Many women also feel lots of “nodules” or “lumpiness” in the breast when the pain is present, and the upper outer quadrants of the breast are most commonly affected.

Non-cyclical mastalgia is defined as pain that does not vary with the menstrual cycle. It may be continuous or intermittent. It is less common than cyclical mastalgia and more common in women in their 40s and 50s. Often no cause can be identified for this type of breast pain.

Pain that is felt in the breast doesn’t always originate from the breast tissue. Nonbreast causes of breast pain include chest wall pain from muscles, ribs, and ligaments. This pain may occur after an injury or physical activity, or it may be unexplained. Treatment may consists of rest and pain medication eg. paracetamol or anti-inflammatory tablets. 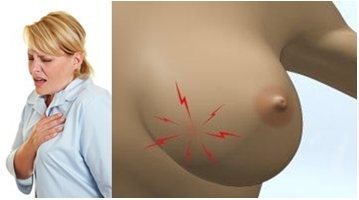 Pain from elsewhere usually comes from the chest wall (musculoskeletal) area. It can be associated with an underlying problem such as inflammation of the chest wall. One cause is costochondritis (Tietze’s syndrome), which is caused by inflammation of the cartilage which joins the ribs to the breastbone (costochondral cartilages). Your specialist may be able to demonstrate that it is the costal cartilage which is tender by applying pressure to it. 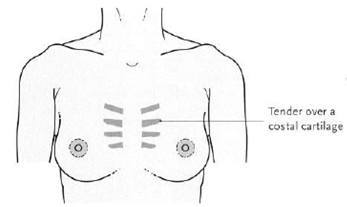 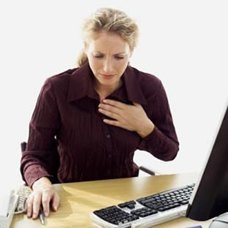 Investigation and management of mastalgia

Any woman with a breast symptom, including significant mastalgia, requires a full breast assessment including clinical breast examination and breast imaging to exclude cancer and other significant breast pathology as an explanation for the symptoms. Ultrasound and/or mammography are indicated depending on the age of the woman and clinical findings. If imaging is normal and there are no worrying clinical findings, the patient should be reassured and given advice on managing breast pain. 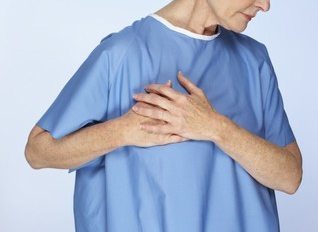 Once assessment has been performed, and no serious abnormality found, the question of treatment then arises. Most women require no treatment at all – simple reassurance is all that is needed. For patients with mastalgia of whatever pattern, the first and most successful treatment is the sympathetic reassurance that their symptoms are not due to cancer. The knowledge that they do not have breast cancer does not cure their breast pain but it does alter their attitude to the pain, so that it may no longer be a serious problem. Patients will often then learn to live with the symptoms especially if they are mild and intermittent.

Often, cyclical mastalgia will settle over the course of a few months, returning to “normal” pre-menstrual breast discomfort without any specific treatment. Studies have shown that cyclical breast pain goes away within three months of onset in about 3 in 10 cases. However, in up to 6 in 10 women where the pain has gone, it tends to develop again sometime within two years. So, in other words, the problem may ‘come and go’ over the years.

Mapping the pattern of pain will determine whether the pain is cyclical, and on which days symptomatic relief may be required.

It is estimated that up to 70 per cent of women wear improperly fitted bras. A well fitting and supportive bra (eg a sports bra) can significantly reduce breast pain. Have a bra specially fitted by trained staff.

While there is no strong evidence that specific dietary changes such as reducing the intake of methylxanthines found in caffeine, chocolate and red wine  and the use of supplements such as vitamins B1, B6, and E improve symptoms, some women find them beneficial. Losing weight and stopping smoking may also be helpful.

The simplest and perhaps most commonly used first line treatment for mastalgia is Evening Primrose Oil, which proves helpful for many women. This preparation should be taken at a dose of four 1000mg capsules per day. You will usually need to take evening primrose oil for about six months. If your pain improves during this time you may be able to halve the dose.

It should be remembered by patients, that evening primrose is not a pain-killer, and must be taken every day. Normally no effect is noted for at least the first 2-4 weeks, after which time symptoms may begin to settle if treatment is effective. Approximately 50% of patients will respond to this form of therapy according to early studies, but this response rate has not been replicated in later research.

In summary, despite the lack of overwhelming supportive data, evening primrose oil may be useful for some individuals, and given the limited untoward effects, is of value to at least try. Patient acceptance is generally high, as it is viewed as a “natural substance” rather than a hormone or drug.

Simple pain medication such as paracetamol can reduce mastalgia. This is of particular benefit for women who get cyclical mastalgia that is only present for a few days each month.

Research has shown that non-steroidal anti-inflammatory pain relief, such as ibuprofen, can help breast pain, particularly non-cyclical pain. They are most effective in creams or gels applied directly to the affected area, but they can also be taken in tablet form.

Other treatments such as acupuncture and aromatherapy have been tried, but their role remains unclear. Stress and anxiety are felt to be significant factors in aggravating breast pain and some women find relaxation therapy, such as relaxation CDs and other complementary therapies that promote wellbeing, useful in reducing the symptoms of cyclical breast pain.

For severe cases of mastalgia that interfere with lifestyle, there are strong hormonal
medications such as tamoxifen, danazol and bromocryptine. These medications may however have significant side effects.

Tamoxifen is a drug more commonly used to treat and prevent breast cancer, however,
research has shown it is also effective in the treatment of cyclical breast pain. It acts to selectively block oestrogen from its effect on breast tissue, thereby reducing pain related to hormonal stimulation. Low dose tamoxifen on a short term basis certainly merits consideration in cases of severe, refractory breast pain. Tamoxifen at a dose of 10mg daily is reported to
relieve cyclical mastalgia in 70 to 90 per cent and non-cyclical mastalgia in 56 per cent of cases.

Danazol, which was often used in the past, is very effective in treating breast pain, relieving symptoms in around 70% of patients but is associated with significant side-effects in about 25% of patients. These side effects include acne, deepening of the voice (that can be permanent), hirsutism (facial hair), increase in weight and amenorrhoea (cessation of the menstrual cycle whilst on treatment). For these reasons, this drug is now rarely used for breast pain.

Another drug also used in the past to treat cyclical mastalgia is bromocriptine. This drug acts to lower the levels of prolactin secretion and is effective in 50% of cases. However, it can cause severe nausea, headaches and dizziness and for this reason is rarely used. 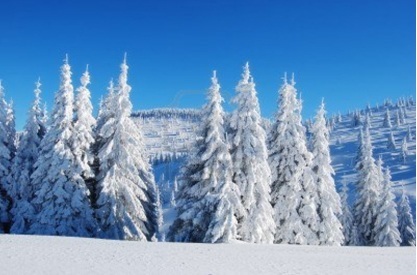