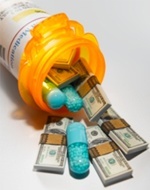 In Australia, some anti-cancer drugs are only available at significant financial cost to patients.

Many of the newest anti-cancer drugs, with proven efficacy in trials, face delays in subsidisation by the Pharmaceutical Benefits Scheme (PBS). In Australia, the cost of most prescription medicines is subsidised by the government through the pharmaceutical benefits scheme . We have a two stage system of drug approval and subsequent subsidisation. New drugs that have been approved by the Therapeutic Goods Administration (TGA) are assessed for inclusion in the scheme by the Pharmaceutical Benefits Advisory Committee (PBAC), an independent expert committee consisting of medical practitioners and pharmacists. The committee considers several issues before recommending a drug, including efficacy, safety, quality of life benefits, and cost effectiveness. The committee may apply restrictions on how drugs can be prescribed. Long delays can occur between the Therapeutic Goods Administration approving a new drug and listing on the pharmaceutical benefits scheme. Some drugs are not subsidised because of overall cost constraints, even though they might represent preferred therapeutic options, compared with subsidised drugs. If a patient wishes to receive an unsubsidised drug, they are required to fund the full cost of the drug themselves. Costs can be considerable – commonly around $1000 per week.

Informing patients about unsubsidised HCDs raises a number of ethical issues for the individual clinician. These include dilemmas about what is in the patient’s overall best interests, perhaps justified paternalism; concern for equity and justice, and most importantly how to respect personal autonomy.

A study published in Annals of Oncology, 2006, looked at the surveyed opinions and practices of Australian medical oncologists regarding discussion of high-cost drugs (HCDs). Oncologists were presented three clinical scenarios in which, compared with standard therapy, treatment with a HCD was associated with a significant, objective patient benefit. The majority of oncologists indicated that they would discuss the HCD with the patient if it were subsidised. Between 28% and 41% (depending on the scenario) would not mention the HCD if it were not subsidised.

Frequently given reasons for not discussing the HCD were ‘the knowledge that they could not obtain this new drug would be too distressing for the patient and their family’ and ‘I would feel bad mentioning a medication that the patient probably cannot afford’. Oncologists were not swayed to discuss a HCD by virtue of the patient’s age, family circumstance or social standing, but were swayed if they felt that the patient could afford or might be inclined to pay for the treatment,

Numerous studies have shown that patients with cancer generally wish to be fully informed.

Patients generally wish to receive as much information as possible, particularly in relation to treatment options, and wish to be active participants in treatment decision-making, yet cannot make informed decisions unless they are presented with all relevant information. It is argued that it is unethical and paternalistic to withhold such information from patients. Doctors are not in a position to decide what their patients should know or how they should spend their resources. A major challenge for clinical practice is how best to conduct these potentially difficult discussions. The study suggested communication skills training may be an important part of this process.

A similar conclusion was reached in a study published in the Medical Journal of Australia, December 2008. Communicating with patients has been identified as a significant source of stress for cancer specialists, particularly if they feel inadequately trained for the task, and this study showed doctors had the most difficulty discussing high-cost drugs with patients they knew could not afford them and discussing topics relating to treatment failure. Only a third of oncologists in this study would discuss a new drug with a patient if the drug was not PBS-subsidised. This study also recommended that oncologists receive more guidance to help them talk to their patients about difficult topics such as the cost of medication.

In 2008 Breast Care Network Australia (BCNA) undertook a research project surveying women who had experienced breast cancer in order to find out what kind of information women would like to hear from their oncologist about high cost drugs. Overwhelmingly, women said that they wanted to know about high cost drugs where they were a suitable treatment option, even if they may not be able to afford it. Interestingly, while the research team considered high cost drugs to be those that cost thousands of dollars, women said that any drug which left them more than $50 per week out of pocket is to them, a high cost drug. Women said that information around treatment choices was far more important than any potential distress caused if they could not afford the treatment. Women said that discussing their financial situation was less concerning compared with many of the other sensitive topics discussed with their doctor. Making assumptions about women’s treatment preferences, and withholding information from women about treatment options, were behaviours that were viewed very negatively by the women.

Doctors should inform patients of unsubsidised drugs if they judge that patients would want the treatment if it were free.