Jane O’Brien attended the 81st Royal Australasian College of Surgeons Annual Scientific Congress in early May 2012 in Kuala Lumpur, Malaysia, at which there were a record 2300 delegates.

Altering the standard step-by-step procedure that takes women facing a mastectomy from diagnosis to surgery to reconstruction can improve the process, according to research from the Epworth Breast Service presented at the meeting. The research was presented by surgical registrar Dr Rhiannon Koirala, who worked closely with Specialist Breast and Oncoplastic Surgeon Miss Jane O’Brien during a rotation at the Epworth Richmond as part of her surgical training.

Key to the new approach is the use of sentinel lymph node biopsy (SLNB) performed as an outpatient procedure a few days prior to mastectomy, rather than doing the SLNB at the same operation as the mastectomy and reconstruction. 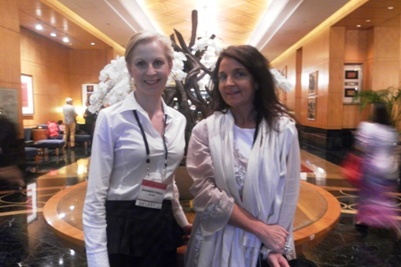 According to the study, particular problems may arise with performing SLNB at the same time as the mastectomy with immediate reconstruction. SLNB involves the removal of some of the first “sentinel” lymph nodes into which cancerous cells from the breast might drain. Studies have shown SLNB to be an effective way to determine the spread of disease to the lymph nodes under the arm.

In current practice using SLNB in conjunction with mastectomy and immediate reconstruction, the sentinel node is quick-frozen and a pathologist then examines the nodal tissue under a microscope. This method gives a diagnosis of cancer spread while the surgeon is waiting to complete the procedure. The diagnosis is confirmed a few days after surgery by a more detailed study called a permanent section.

“If the pathologist does not see tumour in the lymph node on frozen section, there is still a chance that tumour may be found in the lymph nodes on final pathology,” said lead study investigator Miss Jane O’Brien.  “There can be major consequences for a patient who has undergone immediate breast reconstruction if a metastasis is found on permanent section that was not recognized on frozen section.”

The second is that some patients whose lymph nodes prove positive on final pathology may be recommended to undergo post-mastectomy radiation therapy and radiation can sometimes have adverse effects on the reconstruction that may lead to poorer cosmetic results,

“That is why it would be optimal to know the final status of the sentinel node before committing the patient to a large operation, such as mastectomy and reconstruction.”

In the study, 35 patients underwent outpatient sentinel node biopsy, the procedure taking less than an hour. The patients then went home. Three patients had cancer in both breasts; therefore, 38 SLNBs were performed. Pathology was available after 48 hours.

The study demonstrated that exact knowledge of positive versus negative sentinel lymph node prior to mastectomy helped surgeons plan the optimal surgical procedure for the patient, the researchers said.

Of the 38 biopsies, 17 patients (45 percent) had tumour-involved lymph nodes. 65% of these involved nodes it was felt would not have been detected on the standard intraoperative pathological testing. All 17 patients with involved sentinel nodes underwent an axillary lymph node dissection at the time of their mastectomy and 35% of these had further nodal disease detected.

“We conclude that performing a sentinel node biopsy as a staged procedure prior to definitive mastectomy and reconstruction gives the treating surgeons more information to guide the patient regarding the best surgical procedures for them,” Miss O’Brien said.