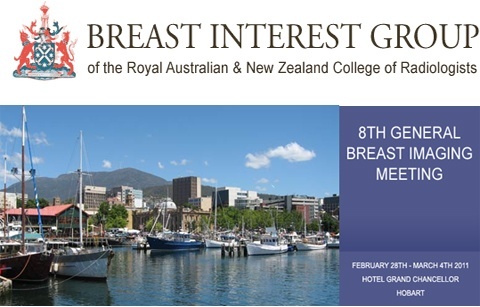 The Breast Interest Group of the Royal Australian & New Zealand College of Radiologists held their 8th General Breast Imaging Meeting in Hobart Feb 28-March4 2011, with a leading edge scientific program and an outstanding international and national faculty. Program sessions were multi-disciplinary, including a debate on “Should MRI be the standard of care for women diagnosed with breast cancer?”. This is exactly the same topic that was hotly debated at the European Breast Cancer Conference in Barcelona, in early 2010, and judging by the robust discussion it provoked, the answer is still no clearer now than then.

Liz Morris, Professor of Radiology and Chief of Breast Imaging Service, Memorial Sloan Kettering Cancer Centre, New York, a world pioneer in MRI, gave an eloquent presentation outlining the case for MRI, hinged on the seemingly “double” standard, whereby there is general agreement that screening women felt to be at potentially high risk of developing breast cancer, by virtue of their family history etc, with MRI is appropriate, but, that as soon as a women is actually diagnosed with breast cancer, further assessment of the breast cancer or, just as importantly, screening of the remainder of the affected breast and also the opposite breast with MRI is felt to be controversial.

It was conceded by both sides that are certain clinical situations in which preoperative MRI may potentially be indicated, such as in patients at high risk for breast cancer and in patients newly diagnosed with an invasive lobular cancer. Jane O’Brien herself in her own clinical practice adopts a pragmatic approach to preoperative breast MRI, having a low threshold to consider it, but discussing the potential advantages and disadvantages with the individual patient.

The potential advantages of preop MRI are associated with the detection of previously unrecognized additional tumour foci, either related to the known cancer, elsewhere in the same breast or in the other breast, which may influence initial surgical decision making.

Potential Drawbacks of preoperative MRI can be outlined as follows:

Jane O’Brien attended the meeting as a member of the invited faculty, speaking on “Surgeon Performed Intraoperative Ultrasound Localisation (IOUL) of Breast Lesions ”. A personal single surgeon series of 61 consecutive cases over a 30 month period was presented, with a 100% rate of successful identification/removal of the lesion. The advantages of IOUL compared to the more commonly used alternative of preoperative hookwire localisation in the radiology department include: ease of scheduling, less discomfort for the patient, less time required for the entire procedure, and overall cost savings. Importantly, it also allows for more cosmetic placement of the surgical incision.

For selected patients, IOUL is a very useful technique for localization of non and vaguely palpable lesions for breast surgeons who wish to provide optimal, state-of-the-art care for their patients, and Jane O’Brien is one of the few breast surgeons in Australia to offer this technique to her patients.