The Royal Australasian College of Surgeons, Annual Scientific Congress (ASC) held over four days, is the College’s major annual educational activity. It provides fellows with a valuable opportunity to present their experience and opinions to their colleagues, in a challenging and truly international forum. The first general scientific meeting of the College was held in Canberra in 1928 and since then, meetings have been held annually, with the venue rotating through the main cities of Australia, New Zealand and Asia.

The 2014 ASC was held in Singapore at the spectacular Marina Bay Sands facility. The biggest hotel complex in Singapore, it comprises three 55-storey towers with 2,500 rooms and crowning the three hotel towers, 200 metres in the sky is a 150-metre infinity-edged swimming pool.

Professor Jerome Pereira, (below left, with Melanie Walker) a UK based national trainer for consultants and surgical trainees in breast oncoplastic and reconstruction surgery, conducted a one day oncoplastic breast surgery workshop prior to the meeting. He has led the development of a specialist Oncoplastic Mastership program at the University of East Anglia and gave an insight into oncoplastic training in the UK, including the range of online learning activities and methods of assessment.

Professor Monica Morrow (above centre, and above right with Melanie Walker) was co chair of the joint Society of Surgical Oncology (SSO) and American Society for Radiation Oncology (ASTRO) consensus on margins in invasive breast cancer, which lead to the recent publication of margin guidelines.

“Margins” refer to the distance between a breast cancer and the edge of the surrounding tissue that is removed along with it. When a tumour is removed, some tissue surrounding it is also removed. The tissue is rolled in a special ink so that the outer edges, or margins, are clearly visible under a microscope. A pathologist checks the tissue under a microscope to see if the margins are free of cancer cells.

Depending upon what the pathologist sees, the margins of a tumor are described as: 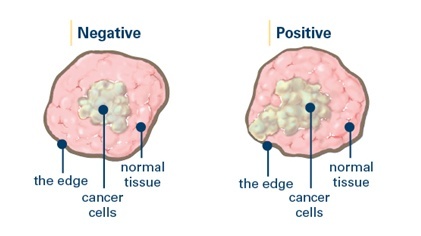 The safety and efficacy of breast conserving therapy is supported by multiple randomized trials demonstrating equivalent survival after BCT or mastectomy published over two decades ago. Since the publication of these trials, showing the efficacy of BCT, the definition of a satisfactory margin has however been the subject of frequent and ongoing debate. Reported re-excision rates to achieve “satisfactory” margins vary widely in the literature from 6-49%, with most large series reporting margin re-excision rates of around 20%.

Prof Morrow (below on panel with Jane O’Brien) outlined in Singapore some of the evidence considered in the development of the recent margin guidelines. These guidelines, based on the results of a systematic review of 33 studies, suggest that ‘‘no ink on tumour’’ be the standard for an adequate margin in patients with invasive cancer undergoing breast conserving surgery.

Currently, about one in four women in the United States undergoes re-excision after lumpectomy, and nearly half of these procedures are performed with the rationale of obtaining wider margins in women whose tumour cells do not touch the inked margin. The new approach is expected to reduce re-excision rates, improve cosmetic outcomes and potentially cut health care costs.

It was acknowledged that some patients may still benefit from additional surgery, suggesting that each case should be individually evaluated in a multidisciplinary fashion, considering all important clinical, pathologic, and treatment variables. The recent guidelines apply to invasive cancer only, and exclude preinvasive disease (DCIS), which will be examined separately in due course.