In this procedure, the entire breast is removed using an elliptical incision 6 to 8 inches in length that begins on the inside of the breast, near the breast bone, and extends upward and outward, either straight or obliquely toward the armpit. When this type of mastectomy is combined with an additional procedure to remove lymph nodes from under the arm it is called a modified radical mastectomy.

Even though the opening is smaller, the same amount of breast tissue is removed. Scarring is negligible and 90% of the skin is preserved. The skin sparing mastectomy has the advantage in that it allows for a better primary breast reconstruction. For women with large breasts, an additional incision may be made to allow the breast tissue to be removed, but the vast majority of skin is left behind after surgery. The increased amount of skin preserved as compared to traditional mastectomy resections serves to facilitate breast reconstruction procedures by utilising the native skin envelope to optimise the contour, texture and colour of the reconstructed breast.Skin-sparing mastectomy is almost always combined with immediate breast reconstruction. 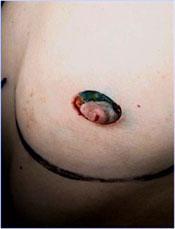 The incision of standard skin-sparing mastectomy

With an expander/implant reconstruction the scar may be vertical, horizontal or oblique 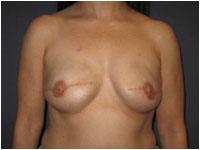 In summary, the main difference between the different types of mastectomy is in the amount of skin removed. Skin and nipple-sparing mastectomies are almost always performed in conjunction with immediate breast reconstruction.