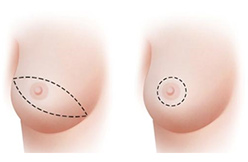 Women with early-stage breast cancer who choose to preserve the nipple during mastectomy have similar survival and recurrence rates as women who undergo standard or skin sparing surgery, according to research presented recently at the annual meeting of the American Society of Breast Surgeons in Florida. Concerns have in the past existed about nipple-sparing mastectomy (NSM) leaving residual glandular tissue in the nipple area, potentially leading to recurrent or new cancers.

Mastectomy is, by definition, removal of the breast. The main difference between the different types of mastectomy is in the amount of skin removed, and the respective incisions, as shown below. (A) A standard simple mastectomy incision removes the nipple, areola and all of the skin between the two incisions. (B) Skin-sparing mastectomy removes the nipple and areola, but preserves almost all of the remaining breast skin. (C) Nipple-sparing mastectomy allows total preservation of the nipple, areola and breast skin, hence leading to the most realistic outcomes following reconstruction.

Nipple-sparing mastectomy is technically more difficult to perform than either standard or skin-sparing mastectomy because the breast surgeon must remove the ductal tissue directly behind the nipple, yet still preserve sufficient blood supply to the skin and nipple but not leave breast tissue behind. For this reason, it is important that women considering nipple-sparing mastectomy choose a specialist breast surgeon with experience in this cutting-edge procedure in order to assure both oncologic and cosmetic success.Like all surgical procedures, NSM has benefits and risks. A woman considering this procedure must discuss it carefully with her breast surgeon and make a choice that best suits her individual needs. Nipple-preserving surgery is certainly not for all patients—those whose cancer is very close to the nipple are at higher risk of having cancer cells remaining, and this technique is also not often ideal for women with large breasts, because of the cosmetic result. Those women undergoing risk reduction (prophylactic) mastectomies due to a high risk of breast cancer as a result of hereditary factors are typically candidates for nipple-sparing mastectomy. See